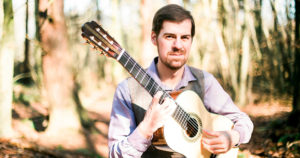 Simon Thacker’s Svara-Kanti is the Scottish virtuoso composer’s Indo-Western community devoted to creating new sound worlds through his immersion in the classical, folk and spiritual traditions of the Indian subcontinent.

​After beginning as a quartet in 2011, the group has metamorphosed into a collective of different lineups  which each focus on innovating on four different aspects of the vast musical macrocosm that exists on the Indian subcontinent: Hindustani classical (north), Carnatic classical (south), Punjabi folk (west) and the Bengali mystical folk Baul tradition of both India and Bangladesh (east). Joining forces with Simon on this journey are some of the greatest performers from their respective traditions.  Each has a unique, compelling approach to their art, and the rare ability to go beyond the extremities of what has been done.

UK BASED: music full of synergy and telepathy that is neither Indian nor Western, but which could not exist without the antecedents of both. Featuring violinist Jacqueline Shave, leader of Britten Sinfonia and one of the UK’s most in demand orchestral leaders, and Sukhvinder Singh “Pinky”, one of India’s most dynamic percussionists whose many achievements include performing on  the Grammy Award winning album A Meeting by the River by Ry Cooder and V.W. Bhatt. Thacker’s “supra-raga” approach, intuition led compositions and highly personal rhythmic language sees three great performers straining at their very limits together in total synchronicity.